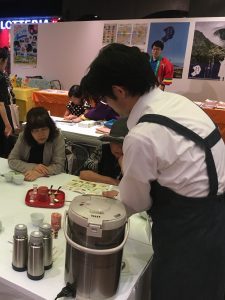 We were invited by Ureshino City Hall to participate in the `Tea Instruction Lesson`, which was a part of an event organized in Tenjin, Fukuoka on the 26th June. The event was held to promote different tourist places for family holidays in summer. We presented Ureshino tourism and Ureshino-tea. Most of the participants said they usually drink Yame-cha (which is sencha), so they were very interested to hear the difference between sencha and tamaryokucha (Ureshino-cha). In a relaxed environment, talking to each other, they enjoyed their cup of tea.

More from my site

Information about the increase of prices of some products

You can login using your social profile
Problem with login?